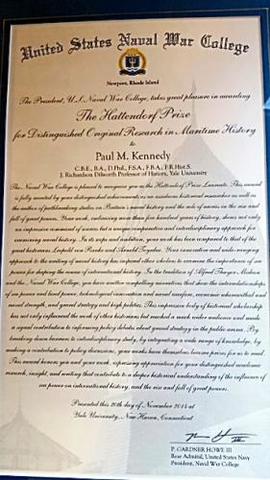 Rear Admiral Gardner Howe III, President of the U.S. Naval War College awarded the Hattendorf Prize for Distinguished Original Research in Maritime History to Professor Paul M. Kennedy yesterday, November 20, 2014. The Hattendorf Prize honors and expresses appreciation for distinguished academic research and writing in the field of maritime history, and is the most prestigious award that a scholar can receive in the field from the U.S. Naval War College. The distinguished award includes a $10,000 cash prize and a bronze medal in addition to the framed award citation (pictured above).

The award citation reads: The President, U.S. Naval War College, takes great pleasure in awarding The Hattendorf Prize for Distinguished Resesarch in Maritime History to Paul M. Kennedy, J. Richardson Dilworth Professor of History, Yale University. The Naval War College is pleased to recognize you as Hattendorf Prize Laureate. This award is fully merited by your distinguished achievements as an assiduous historical researcher as well as the author of path breaking studies on Britain’s naval history and the role of navies in the rise and fall of great powers. Your work, embracing more than five hundred years of history, shows not only an impressive command of sources but a unique comparative and interdisciplinary approach for examining naval history. In its scope and ambition, your work has been  compared to that of the great historians Leopold von Ranke and Arnold Toynbee. Your innovative and wide-ranging approach to the writing of naval history has inspired other scholars to examine the importance of sea power for shaping the course of international history. In the tradition of Alfred Thayer Mahan and the Naval War College, you have written compelling narratives that show the interrelationships of sea power and land power, technological innovation and naval warfare, economic wherewithal and naval strength, and grand strategy and high politics. This impressive body of historical scholarship has not only influenced the work of other historians but reached a much wider audience and made a signal contribution to informing policy debates about grand strategy in the public arena. By breaking down barriers to interdisciplinary study, by integrating a wide range of knowledge, by making a contribution to policy discussions, your works have themselves become prizes for us to read. This award honors you and your work, expressing appreciation for your distinguished academic research, insight, and writing that contribute to a deeper historical understanding of the influence of sea power on international history, and the rise and fall of great powers. Presented this 20th day of November 2014 at Yale University, New Haven, Connecticut.

A gallery of the award presentation can be viewed here.