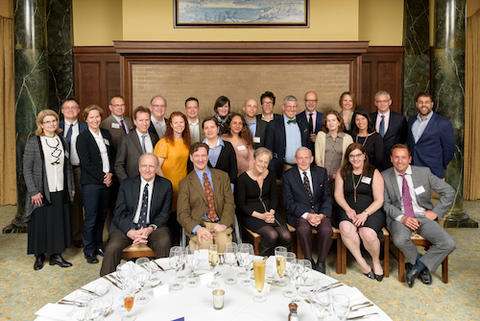 International Security Studies (ISS) celebrated three decades of support for the study of international history, grand strategy, and global security at Yale at a conference on May 12 and 13. The event also honored ISS’s long-time director, Professor Paul Kennedy, by bringing back his former students —many of whom are now professors at leading institutions in their own right—to present papers inspired by his work.

Highlights included reflections on the legacy and influence of Kennedy’s most renowned work, “The Rise and Fall of the Great Powers,” by Matthew Connelly (Columbia), Richard Drayton (King’s College, London), and Fredrik Logevall (Harvard). Another panel presented new research in military history, while Mark Lawrence (Texas) and Lucy Chester (University of Colorado-Boulder) explored analogies in historical contexts; Jennifer Siegel (Ohio State) described the role of finance in World War I; and Maya Jasanoff (Harvard) examined the role of the sea in globalization. The conference concluded with a conversation between Will Hitchcock (Virginia) and Kennedy, reflecting on the latter’s career and his approach to historical inquiry. Because each speaker was a former student of Kennedy’s, as well as a former recipient of ISS’s funds, their papers emphasized both the Yale professor’s scholarly renown and ISS’s role in shaping the historical profession.

Established by the provost in 1988 to promote collaboration among various faculty projects and funding applications, ISS was expected to be flexible and inexpensive, and to support new endeavors and ideas in the fields of international history and security studies. Kennedy, the J. Richardson Dilworth Professor of History, has served as director of ISS since 1989, and under his leadership, ISS has hosted a wide range of grants and initiatives. It initially operated grants from the MacArthur, Bradley, and Olin Foundations, and it housed U.N. Studies at Yale and, subsequently, the Academic Center for United Nations Studies. It administered the Red Army Secret Archives Project, and recently encouraged the return of ROTC to Yale, welcoming the Commandant’s Marine Corps Fellow. After Professor John Gaddis arrived at Yale, ISS launched the Grand Strategy (GS) Project in 2000, consisting of a year-long course and accompanying lecture series. GS has grown to become one of Yale’s flagship courses, thanks to the 2006 Brady-Johnson gift, and it continues to operate through ISS.

Today, ISS hosts an array of extracurricular activities each year, including lectures, dinner debates, conferences, colloquia, and discussion groups. Its most recent initiative seeks to further the study of naval and maritime issues at Yale. ISS also continues to fund language training and archival research for Yale students, while its postdoctoral and predoctoral fellowships bring scholars from other universities to campus.