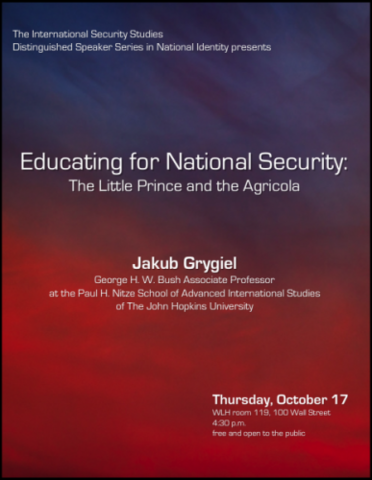 As part of the International Security Studies Distinguished Speaker Series in National Identity, Jakub Grygiel will be giving a talk titled, “Educating for National Identity: The Little Prince and the Agricola” at 4:30 p.m. on Thursday, October 17th in WLH room 119, 100 Wall Street.

Jakub Grygiel is the George H. W. Bush Associate Professor at the Paul H. Nitze School of Advanced International Studies of The Johns Hopkins University. He has previously worked as a consultant for the OECD (Paris) and the World Bank (Washington, DC), and was an international security commentator for the Swiss newspaper Giornale del Popolo (Lugano, Ticino).  His first book, Great Powers and Geopolitical Change, was published in 2006 by Johns Hopkins University Press. His writings on international relations and security studies have appeared in The American Interest, Journal of Strategic Studies, Orbis, Commentary, Joint Forces Quarterly, Political Science Quarterly as well as U.S., Swiss, Polish, and Italian newspapers. He iscurrently working on a book on the strategic challenges presented by stateless groups. He earned a Ph.D. and an MPA from Princeton University, and a BSFS Summa Cum Laude from Georgetown University.

The talk is free and open to the public.