Upcoming lecture: Ulrike Guerot on Germany after the election 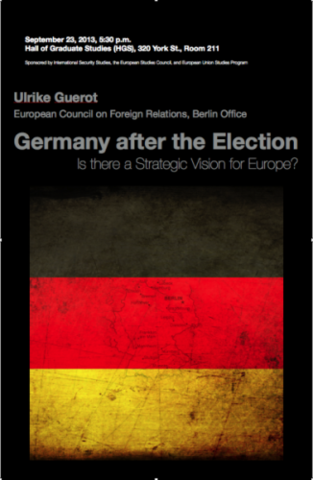 Next Monday, September 23, Ulrike Guerot will give a talk on “Germany After the Election: Is there a Strategic Vision for Europe?”. The talk will take place at 5:30 p.m. in the Hall of Graduate Studies (HGS), 320 York Street, room 211.

The talk will be co-sponsored by International Security Studies, the European Studies Council, and the European Union Studies Program.

Ulrike Guérot is Representative for Germany and Senior Policy Fellow at the European Council on Foreign Relations since 2011. From July 2007 until 2011 she built up the German branch of the ECFR in Berlin as Head of Office. Since 2010 she has been leading the Germany in Europe project and is now particularly active in the Reinvention of Europe programme.

Previously she was Senior Transatlantic Fellow with the German Marshall Fund (2004-2007), and headed the European Union unit at the German Council on Foreign Relations (DGAP) in Berlin (2000-2003). Ulrike also worked in the US as Assistant Professor on European studies at Johns Hopkins University and Scholar at Deutsches Haus, New York University. Furthermore she was Senior Research Fellow with Jacques Delors at Notre Europe in Paris, and staff member of the German Bundestag’s Commission on External Affairs.

She has been publishing extensively on European and transatlantic issues in a variety of journals and newspapers, and is frequently invited to comment on  EU issues in the media. She was also awarded the prestigious “Ordre du Mérite” for her engagement on European integration.